The percentage of Czech respondents reporting late payment remained largely stable. However, at 89.8% this is one of the highest percentages in the region.

Despite a minor decrease in the proportion of overdue B2B invoices, 38.7% of Czech respondents reported that their companies have been negatively affected by past due invoices. Consequently, they needed to postpone or even default on payments to their own suppliers. The proportion of uncollectable B2B receivables is stable and write-offs occurred most often due to the customer’s bankruptcy and the inability to locate the customer. 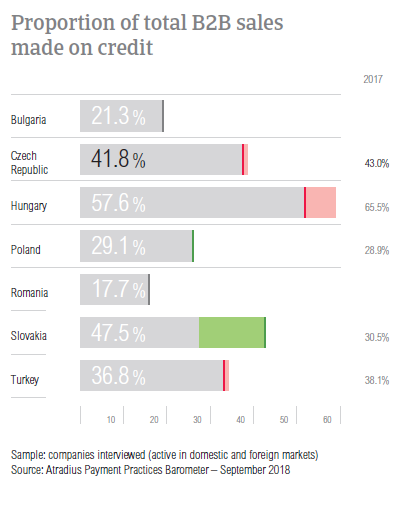 The proportion of total B2B sales on credit in the Czech Republic decreased slightly from 43.0% last year to 41.8% in 2018. Similarly to what has been observed in the other countries surveyed in the region, the percentage of sales on credit to domestic B2B customers is higher than that of credit sales to foreign B2B customers (44.7% versus 38.8%).

We trade on credit because our domestic customers request it. It is the main condition for doing business with us.

Well-established business relationships is also the top reason mentioned by Czech respondents in regards to selling on credit to their foreign B2B customers. Credit seems to be offered to foreign customers also because it’s considered standard in the industries they operate. The main reasons for refusing to grant credit to foreign B2B customers are poor payment behaviour (mentioned by 25.9% of respondents), high currency risk and a lack of information on the customer’s business or payment performance (each of these reasons was noted by 22.2% of respondents).

We trade on credit to reward long-term partnership and trust.

Based on the survey findings, there was a minor decrease in the proportion of overdue B2B invoices in the Czech Republic; from an average of 36.9% in 2017 to 34.1% this year. This occurred mainly because of a drop of almost four percentage points in foreign past due B2B invoices. 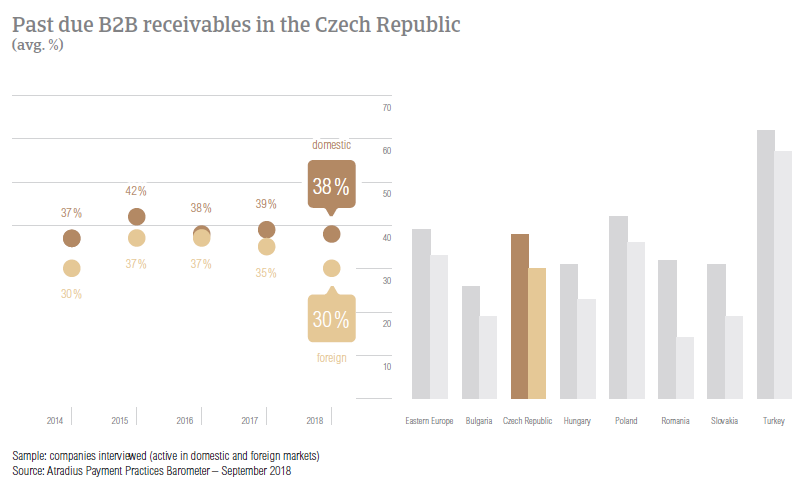 The average Days Sales Outstanding (DSO) figure in the Czech Republic decreased by two days in 2018 and stands at 44 days. Among the Eastern European countries surveyed, the Czech Republic recorded the second lowest average DSO after that of Slovakia (43 days). 74.7% of respondents said that they expect their company’s DSO to remain stable over the coming 12 months, 10.8% that they expect it to increase slightly and 9.1% expect a slight decrease. 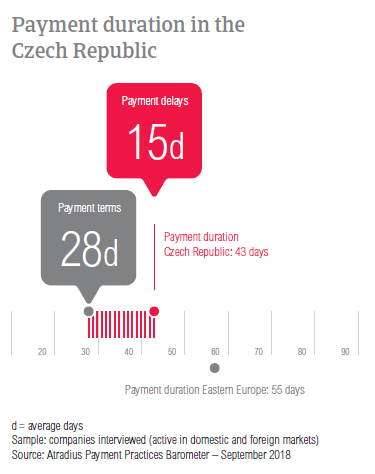 In 2018, there is not much difference between payment delays by domestic and foreign B2B customers. Czech respondents reported an increase of one day in respect to domestic B2B customers (on average, 16 days) and a four day decrease in regards to foreign B2B customers (on average, 13 days). The changes in average payment terms and in payment delays caused a small decrease in the country’s average payment duration. This went down from 46 days in 2017 to 43 days this year.

Czech respondents also reported buyers using outstanding invoices as a form of financing as the top reason for payment delays by foreign B2B customers. 51.0% of Czech respondents cited this – the second highest percentage in the region after that of Turkey. The second most frequently mentioned reason for payment delays by B2B customers abroad was the complexity of the payment procedure, cited by 33.3% of respondents.

According to our survey findings, the majority of businesses have not been significantly impacted by overdue invoices (61.3% of respondents stated this). Of those who reported an impact, 17.3% said that they needed to postpone payments and 11.9% said that they had to default on payments to their own suppliers. For 11.3% of respondents, overdue B2B invoices led to revenue loss.

E-invoicing with no noteworthy effect on payment duration 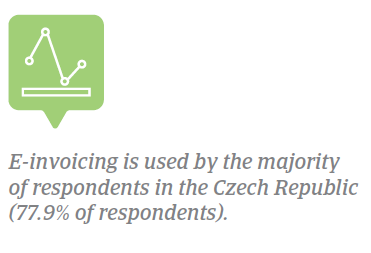 Most of the respondents in the Czech Republic, 77.9%, said that they are already invoicing their domestic and foreign B2B customers online and 11.1% of respondents plan to adopt e-invoicing in 2018. In contrast, 10.6% of said they are not using e-invoicing and 1.0% indicated that they have stopped using it.

Of the respondents already using e-invoicing, 39.0% said that after invoicing their B2B customers electronically, they received payments on their B2B invoices quicker. For 57.1% of respondents online invoices did not have a noteworthy effect on payment. 3.9% noticed a slowdown in speed-of-payment. 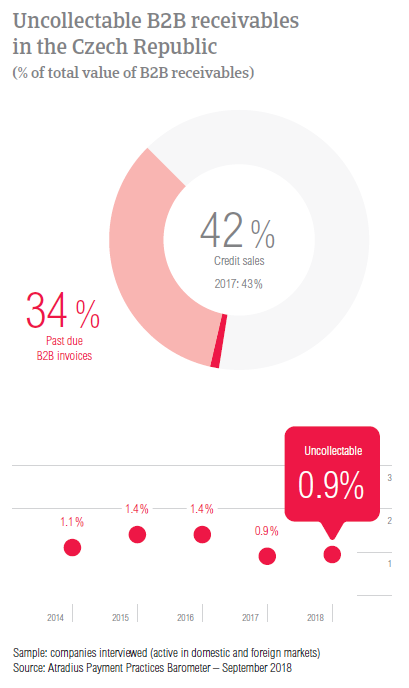 Uncollectable receivables – in line with the regional level 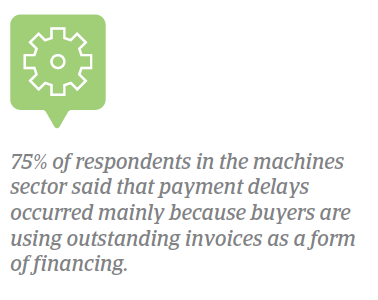 Looking at the coming 12 months, most respondents in the Czech Republic do not expect changes in the payment behaviour of their B2B customers in the above-mentioned sectors. Should a change occur, they believe that this will be for the better.