The adoption of a pension reform that provides savings of at least 600-700 billion reais is key to keep public debt sustainable and to sustain invertors’ confidence in the long-term. 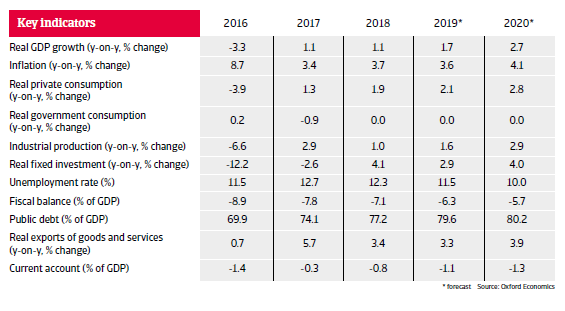 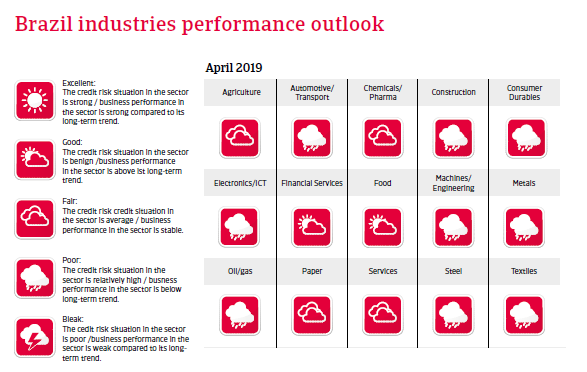 A business-friendly new administration in charge with major reform plans

Jair Bolsonaro of the Partido Social Liberal (PSL) won the October 2018 run-off presidential election with 55% of the votes. The election outcome underlined popular disillusion over high crime rates as well as cronyism and corruption associated with the political establishment (more than half of Congress members and even former President Michel Temer have been implicated in the massive “Lava Jato” corruption scandal).

The new administration pursues free-market and socially conservative reform policies, welcomed by the Brazilian business community and building on the market-oriented policies of the previous government. A team of orthodox economists led by the new Minister of the Economy Paolo Guedes has set out an ambitious reform agenda to boost the economy and to restore government finances by overhauling the costly social security system and privatising state-owned companies.

However, economic policymaking could be hampered by a highly fragmented and polarised Congress, with 30 parties in the lower house and 21 in the Senate, with the ruling PSL having just 10% of the seats in the lower house. President Bolsonaro needs to build and manage working coalitions in order to pass major reforms, particularly those requiring constitutional changes (such as the pension reform recently proposed to Congress).

Emerging from recession and decreasing insolvencies

A modest economic rebound is set to continue in 2019 after Brazil’s longest and deepest recession in 2014-2016, when GDP shrank by almost 9%. The 2018 economic performance was impacted by business and consumer uncertainty ahead of the elections, a truckers’ strike and subdued household spending (hampered by high unemployment of more than 12%). 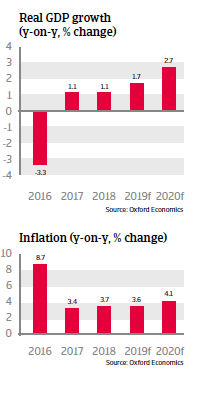 While consumer and business confidence have increased after the elections, exports are still impacted by the ongoing economic problems in Argentina, Brazil´s third largest export market. In 2019 and in 2020 inflation is expected to remain within the Central Bank’s target band of 3%-6%, enabling it to leave the official interest rate unchanged at a record low of 6.5% for the time being. This supports both investment and lending.

Business insolvencies increased significantly in 2015 and 2016 (in particular judicial recovery cases rose about 45% year-on-year in 2016). After levelling off in 2018 business insolvencies are expected to decrease 5% in 2019, but to remain on elevated levels compared to pre-crisis years. 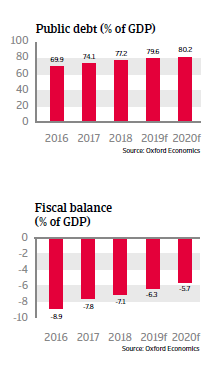 Despite the rebound, the economic environment remains challenging, and investors as well as consumers will remain reluctant until there is greater clarity about the tackling of fiscal woes and the adoption of a pension reform. A higher than expected growth rate would require increased risk appetite by banks and borrowers and higher capital investment, especially in infrastructure.

The sizeable fiscal deficit remains Brazil´s major economic weakness, with government debt expected to increase from 56% of GDP in 2014 to 85% of GDP in 2023. While a 2016 constitutional amendment to eliminate automatic budget spending growth in line with rising inflation is a crucial step to curb spending, the effect will only materialise in the medium-term. The real issue is pensions, as expenses for pensioners currently amount to one third of the federal budget before interest payments, or 9% of GDP, crowding out higher infrastructure investment among others. Without a pension reform, the budget deficit would increase to 14% of GDP in 2022, and debt sustainability would come under threat. For the time being the fact that most of the debt is financed domestically (87%) in local currency (95%) and the government’s net-external creditor position serve as risk-mitigating factors.

In February 2019 President Bolsonaro proposed a major pension overhaul to Congress, aimed at savings of up to 1.2 trillion reais (USD 310 billion) over the next 10 years. The proposal includes lifting the minimum retirement age and increasing contributions among other things. It is more ambitious than those made by the previous administration. However, any pension reform requires a constitutional amendment, which must be approved by a three-fifths majority in both houses of Congress. Given parliamentary fragmentation and opposition from labour unions, it seems most likely that even a compromise reform package won´t pass before the second half of 2019.

In any case, the adoption of a pension reform that provides savings of at least 600-700 billion reais is essential to keep public debt sustainable and to sustain invertors’ confidence in the long-term. Together with tax reforms and measures to improve competitiveness it would help to increase economic growth.

Due to a relatively high level of portfolio investment inflows (more than 130% of international reserves) Brazil remains vulnerable to shifts in investor sentiment. However, a strong financial sector, sizeable official reserves and relatively low external refinancing needs enable the flexible exchange rate to act as a shock absorber. While the real depreciated 15% in total against the USD last year, it started to rebound again in autumn 2018. Major currency volatility is not expected in 2019, but renewed depreciation cannot be ruled out should substantial pension reform not materialise. 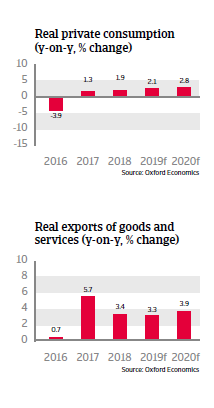 Corporate external debt has increased, but remains manageable. While businesses have become somewhat more exposed to refinancing risk, this exposure remains generally low. Most externally indebted businesses have either hedged their currency risk or have access to large foreign currency reserves. Additionally declining interest rates on domestic debt and a large share of debt at fixed rates (about 60%) mitigate the impact of any further US monetary tightening on debt service.

Brazil´s banking sector is well regulated and sufficiently capitalised. The system is only modestly dollarized and dependency on external wholesale financing is low, shielding the banking system from adverse shocks. The share of non-performing loans has decreased in 2018 compared to 2017 (to 3.1% in Q4 of 2018).

EU to speed up completion of free trade agreements