Despite a significant decrease in 2018, at 74 days, the average DSO reported by survey respondents in Italy remains the highest in Western Europe.

In 2018, the average payment duration in Italy improved after respondents here gave shorter payment terms and reported shorter payment delays by their B2B customers. The proportion of past due B2B invoices is stable at 43.9%. However, the country had the highest percentage of respondents who stated that their businesses have been impacted by overdue invoices. To manage this impact, 21.6% of Italian respondents had to take specific measures to correct cash flow and to postpone payments to their own suppliers while 18.4% had to request a bank overdraft extension. Despite a significant decrease in 2018, at 74, the average DSO figure in Italy remains the highest in the region.

Fewer B2B sales made on credit

In 2018, the proportion of B2B sales transacted on credit decreased slightly to 40.0% from 42.5% in 2017. This is the fourth consecutive year with a decline. Purchases of domestic B2B customers are more likely to be made on credit: 49.2% of B2B transactions on credit are domestic and a lower 30.8% are foreign.

Similarly to what was stated in the region overall, respondents in Italy are granting credit to trustworthy customers with whom they have established long-term business relationships and because of their desire to increase sales both domestically and internationally. Credit sales are also considered common practice in the industries in which the survey respondents operate.

We grant trade credit because this can increase sales.

We have long-term customers and granting credit so far has led to successful cooperation.

A lower DSO but still the highest in the region

In 2018, 87.2% of respondents in Italy reported late payments by their B2B customers. This percentage is in line with the regional average and is stable compared to 2017; when it stood at 86.7%. Payment delays occurred far more often with domestic B2B customers than with B2B customers abroad (91.1% versus 83.3%). 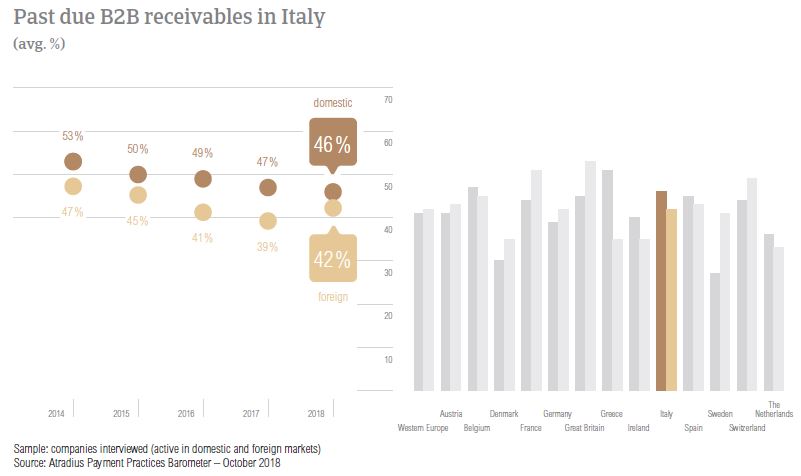 In 2018, the average Days Sales Outstanding (DSO) figure recorded in Italy is 74 days, 11 days shorter than in 2017. Despite the decrease, Italy still has the highest DSO in the region, significantly higher than the average of 44 days for the region overall. When asked about the expected DSO trend over the next 12 months, 61.0% of respondents said that they do not foresee any changes. However, 22.6% expect an increase while 16.4% a decrease.

75.3% of Italian respondents felt the impact of overdue B2B invoices

Despite a significant decrease in 2018, Italian respondents still give some of the longest payment terms in Western Europe. Domestic B2B customers in Italy were given, on average, 51 days to settle payments (56 days in 2017). Foreign B2B customers were asked to pay within 36 days on average (44 days in 2017).

Confirming the above, 37.1% of Italian respondents said that they are more likely to give their domestic B2B customers a longer time to settle invoices. A slightly lower percentage, 35.7% said that they are inclined to give their domestic B2B customers a shorter time for payment while 27.3% said that they would not differentiate payment terms between domestic and foreign customers. The main reasons for differentiating payment terms in Italy are internal policies, industry practices and the economic situation in the export country. 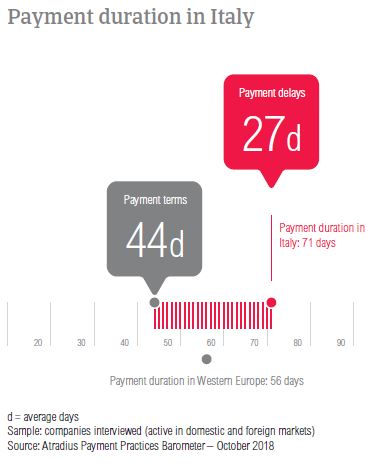 Asked whether overdue B2B invoices affected their businesses over the past 12 months, most respondents in Italy mentioned an impact. 21.6% of respondents said that they needed to postpone payments to their own suppliers and another 21.6% that they needed to take specific measures to correct cash flow. 16.8% of respondents said that overdue invoices led to revenue loss. Only 24.7% of suppliers in Italy responded that there was no significant impact on their businesses over the past 12 months. 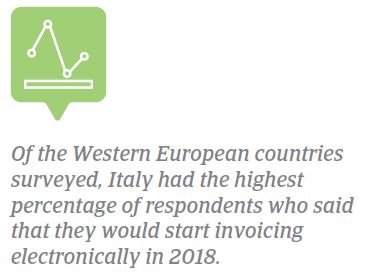 The majority of respondents in Italy (63.0%) are invoicing their domestic and foreign B2B customers online. In contrast, a much lower 13.3% said that they are not invoicing electronically. Of the Western European countries surveyed, Italy had the highest percentage of respondents (23.2%) who stated that while they are not invoicing their B2B customers electronically, they intend to start doing so in 2018. Of the respondents who are already using this method of invoicing, 51.9% said that electronic invoices accelerated payments. 42.1% did not notice a noteworthy effect on payment duration and only 6.0% noticed a slowdown in payments.

Concerned about US protectionism and Fed policy becoming misguided

A decrease in uncollectable receivables 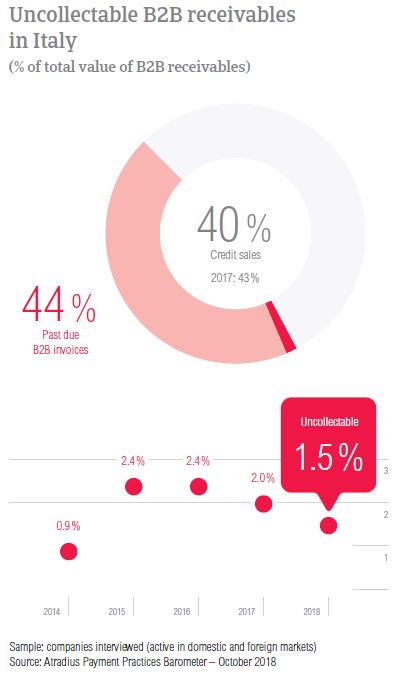 Uncollectable receivables in Italy originated most often from B2B customers in the construction, consumer durables, business services and services sectors. The main reason why B2B receivables were uncollectable was bankruptcy. 60.9% of respondents stated this reason, an increase compared to 2017 (54.0%). Other frequently cited reasons for write-offs are the failure of collection attempts and the high cost of pursuing debtors (reported by 34.1% and 31.2% respectively).

As mentioned before, in 2018, the average payment terms given by Italian respondents stand at 44 days and are some of the longest in the region. Despite this, B2B customers in the paper and transport sectors enjoyed even longer average payment terms (68 days and 60 days respectively). B2B customers in the agriculture sector are being asked to pay much faster (on average, within 39 days).

Despite average payment terms of 49 days, B2B customers in the construction sector generated some of the longest delays. B2B customers in this sector paid on average, 27 days after the due date and the main reason for delays was insufficient availability of funds (mentioned by 79.0% of respondents). Another problematic sector was consumer durables, where B2B customers paid, on average 30 days late. The main reason behind the delays was, once more, insufficient availability of funds, cited by 42.0% of Italian respondents. 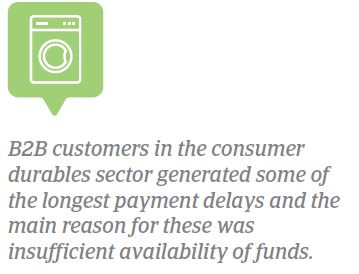 Smaller automotive businesses experienced a decrease in equity, solvency and liquidity ratios - a trend that is expected continue in the coming months.

Despite a forecast 10% year-on-year decrease in 2018 the number of business insolvencies will still be much higher than the levels registered in 2008.