In 2018, respondents in Hungary reported a significant increase in DSO and that the proportion of uncollectable B2B receivables also went up slightly.

Respondents in Hungary have maintained their credit friendly stance, trading on credit to nurture long-term cooperation and because this is a common business practice. In 2018, more respondents reported frequent late payments by their B2B customers. The main reasons being insufficient availability of funds, buyers using outstanding invoices as a form of financing and the complexity of the payment procedure. Bankruptcy and the inability to locate the customer remain the top reasons for writing off B2B receivables as uncollectable.

Historically, respondents in Hungary have been the most inclined to sell on credit terms in the Eastern European region. Despite a decrease of almost eight percentage points this year, survey results point to the same open stance with 57.6% of B2B sales made on credit. Respondents are clearly more comfortable selling on credit to domestic B2B customers, for which the proportion of total B2B sales made on credit is higher than that registered with foreign B2B customers (60.7% versus 54.4%).

We offer credit terms based on our trading experience and if the customer is creditworthy.

Similarly to what was mentioned in regards to domestic B2B customers, Hungarian respondents use credit sales because it is common practice in the industries they operate in and to reward long-lasting cooperation. Respondents in Hungary refuse credit sales to their foreign B2B customers because of high economic and political risk in the customer’s country, poor payment behaviour and high currency risk (each of these reasons was mentioned by 26.3% of respondents).

We trade on credit when there’s long-term cooperation and increased trust.

A steep increase in DSO

In 2018, Hungary has one of the lowest percentages of respondents reporting late payments by their B2B customers (70.9%). This, however, represents a significant increase from the 66.5% reported in 2017. Late payment was reported much more frequently with domestic B2B customers than with foreign B2B customers (79.9% versus 61.8%). 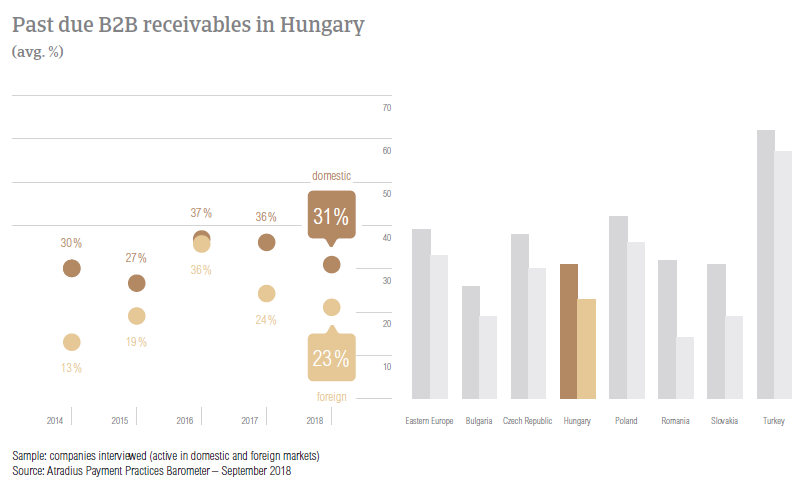 In 2018, the average Days Sales Outstanding (DSO) figure recorded in Hungary is 49 days, 12 days longer than in 2017. This was the biggest increase reported in the region. Despite the increase, Hungary’s average DSO is still well under the regional average of 59 days. Looking at the DSO trend over the next 12 months, 74.6% of respondents do not expect any changes in their company's DSO. Of those who foresee a change, 13.3% expect a slight increase and 9.8% expect a slight decrease.

Most payment delays caused by lack of funds 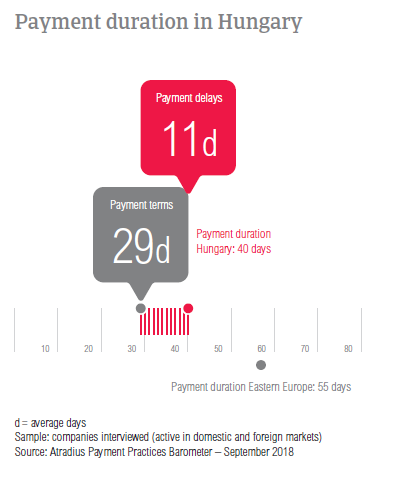 In 2018, respondents in Hungary need a slightly shorter time to convert B2B invoices into cash. The average payment duration in the country decreased from an average of 42 days in 2017 to 40 days this year.

Among the Eastern European countries surveyed, Hungary had the highest percentage of respondents (73.4%) who stated that payment delays did not have a significant impact on their businesses. Of those who have experienced an impact, 10.4% said that they needed to postpone payments to own suppliers and 8.7% that they needed to pursue additional financing.

Convinced that e-invoicing does not influence payment duration 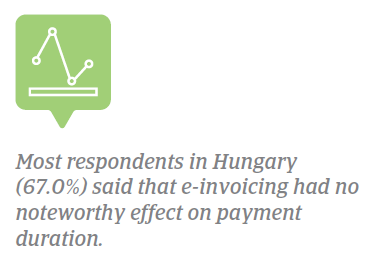 Asked about the effect of e-invoicing on payment duration, the majority of Hungarian respondents (67.0%) believe that e-invoicing had no noteworthy effect. This is the highest percentage of respondents stating this in Eastern Europe. 33.0% of respondents noted quicker payments after invoicing their B2B customers online and there were no respondents to report a slowdown in payment.

US protectionism and geopolitical risk believed to affect global growth

Asked to rank four potential risks to global growth (US protectionism turning into a trade war, Fed policy becoming misguided, a ‘hard landing’ in China, geopolitical risk), 40.9% of Hungarian respondents perceive the protectionist moves by the US as the risk that would most significantly hamper trade. Another 22.2% of respondents in the country agree that this is indeed a significant risk even though it may not be the most important one. A high percentage of respondents in the country (31.5%) cited geopolitical risk as the most significant risk to global economic development.

In 2018, respondents in Hungary reported a small increase in the proportion of uncollectable receivables. This increased from 0.6% in 2017 to 0.8% this year. Domestic B2B receivables were written off significantly more often than foreign ones.

Uncollectable receivables originated most often from B2B customers in construction, consumer durables, food, business services and services. Bankruptcy was also the main reason for write-offs in Hungary, where it was mentioned by 65.2% of respondents. The second most frequently reported reason for write-offs is the inability to locate the customer, mentioned by 37.7% of respondents.

B2B customers in consumer durables are some of the slowest payers

As mentioned previously, Hungarian respondents give their B2B customers 29 days, on average, to fulfil their payment obligations. B2B customers in the machines sector (39 days) and those in the electronics, paper and textiles sectors (each with an average of 35 days) had a longer time to settle invoices. In contrast, B2B customers in the agriculture and services sectors have been asked to pay the fastest (on average, within 20 days and 21 days respectively).

Suppliers in Hungary reported that B2B customers in the consumer durables sector have been some of the slowest payers. They paid, on average 14 days after the due date. 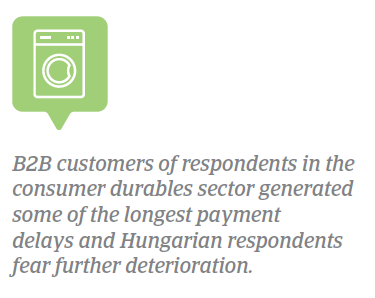 Similarly to what has been stated for the country overall, the main reasons for payment delays in the consumer durables sector are insufficient availability of funds (mentioned by 70.0% of respondents) and buyers using outstanding invoices as a form of payment (50.0% of respondents). Respondents in this sector also seem most concerned about the payment behaviour of their B2B customers in the coming 12 months. 27.0% stated that they expect deterioration.

Due to the high export dependence any imposition of import tariffs by the US would have an adverse impact on the sector, especially for Tier 1 businesses.