Of the Eastern European countries surveyed, Bulgaria had the highest DSO and 19.8% of respondents expect another slight increase over the coming 12 months.

Of the Eastern European countries surveyed, Bulgaria had the second lowest proportion of B2B sales on credit. Respondents in the country said that they mainly opt for trade credit because of established, long-term business relationships. Trust and convenience were also frequently mentioned. The proportion of past due B2B receivables is the lowest in the region but the impact of overdues cannot be neglected. Bulgaria had the highest percentage of respondents stating that payment delays were a consequence of insufficient availability of funds. Only domestic B2B receivables were written off as uncollectable and the main reason thereof is the customer going bankrupt or out of business.

Selling on credit because of long-term relationships with B2B customers 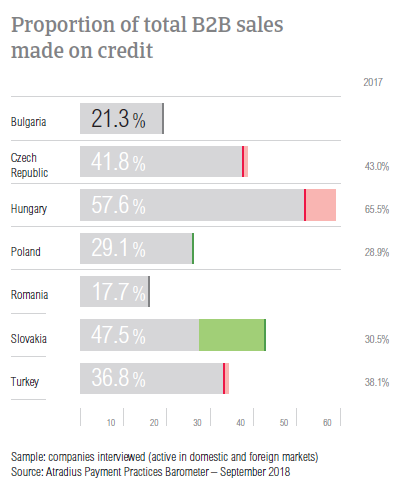 Respondents in Bulgaria have one of the least credit friendly stances in Eastern Europe. On average, only 21.3% of respondent’s sales are made on credit. This compares to 36.9% at the regional level. Similarly to their peers in the region, Bulgarian respondents are more comfortable selling on credit to domestic than to foreign B2B customers (24.5% versus 18.1%).

Trust, convenience and standard business practice - were often mentioned by Bulgarian respondents as reasons why they would trade on credit with their domestic B2B customers. Respondents in the country also highlighted that the relationship with their customers weighs heavily in this decision – long-term customers are more likely to be offered credit terms. Not providing credit to domestic B2B customers is usually associated with poor payment behaviour or the financial weakness of the customer (as mentioned by 27.9% and 25.6% of respondents respectively).

We trade on credit with companies we trust and with whom we have been working since our inception.

We trade on credit because this is a common practice in most Western European countries and the company needs to work that way.

The highest DSO in Eastern Europe

Bulgaria had the lowest proportion of overdue B2B invoices in Eastern Europe. This stands at 22.9% and is well below the regional average of 35.9%. However, on average, a much higher proportion of domestic than foreign B2B invoices are unpaid by the due date. 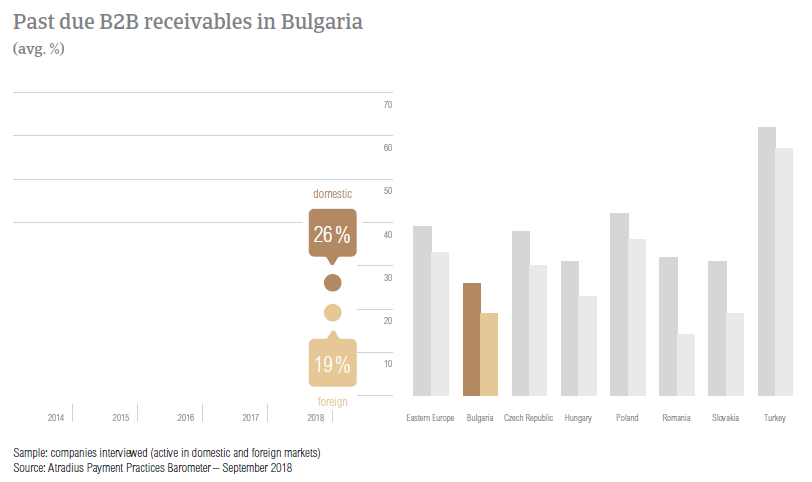 The highest DSO in Eastern Europe

Bulgaria had the lowest proportion of overdue B2B invoices in Eastern Europe. This stands at 22.9% and is well below the regional average of 35.9%. However, on average, a much higher proportion of domestic than foreign B2B invoices are unpaid by the due date.

In 2018, the average Days Sales Outstanding (DSO) figure recorded in Bulgaria is 79 days. This is the highest DSO in the region and well above the 59 days average for the region overall. Despite an already high DSO, 19.8% of respondents said that they foresee a slight increase in their company’s DSO over the coming 12 months. 71.9% do not expect any changes while 4.7% said that they expect a slight decrease.

Payment delays due to insufficient availability of funds

Respondents in Bulgaria did not report major differences in payment delays between domestic and foreign customers. Domestic B2B customers delay payments, on average, by 9 days and foreign B2B customers by 10 days. Based on the survey findings, the average payment duration in Bulgaria is 47 days. This compares to 55 days in Eastern Europe overall. 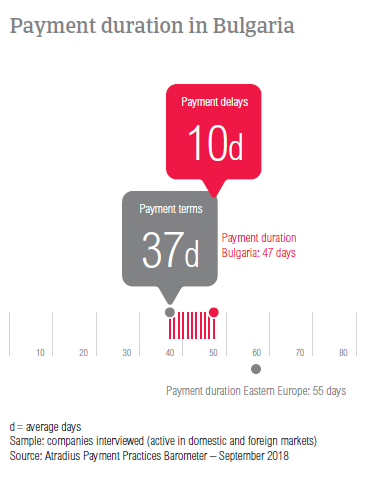 The majority of respondents in Bulgaria (72.4%) said that payment delays did not have a significant impact on their businesses. Of the respondents that reported to have been affected, 12.4% said that they needed to postpone payments to their own suppliers and 11.9% that they lost revenue. 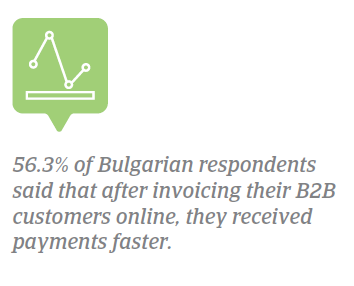 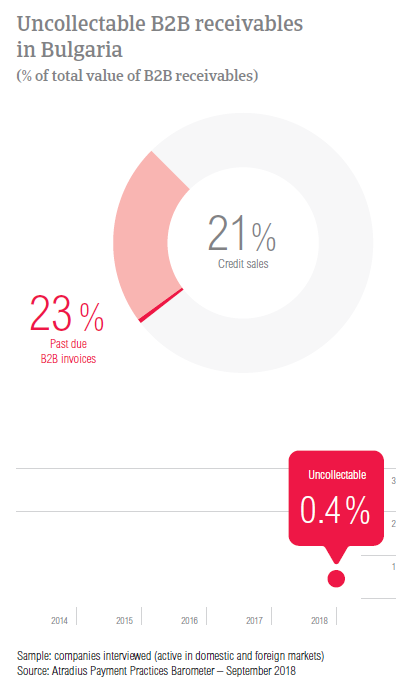 Uncollectable receivables originated most often from B2B customers in construction, consumer durables, food, business services and services. 63.5% of Bulgarian respondents said that the main reason for writing off B2B receivables as uncollectable is the customer going bankrupt or out of business. A high percentage of respondents (31.3%) stated old age of the debt as the main reason for write-offs.

Payment behaviour of B2B customers in agriculture expected to worsen

Bulgarian respondents said that in 2018, B2B customers in the agriculture and consumer durables sectors took the longest time to settle invoices. These paid on average, 16 days late and 6 days late respectively. Similarly to what was stated for the country overall, the main reason for domestic and foreign payment delays was insufficient availability of funds. 86.0% of respondents in the agriculture sector and 88.0% in the consumer durables sector stated this. 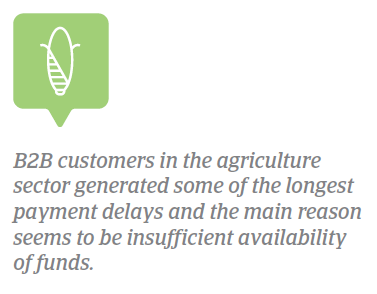 67.0% of respondents in the agriculture sector and 71.0% in the consumer durables sector do not foresee any changes in the payment behaviour of their B2B customers in the coming 12 months. If changes are expected, in the agriculture sector, 25.0% of respondents said that they expect deterioration, while 8.0% expect improvement. Respondents in the consumer durables sector are more optimistic, with 18.0% expecting improvement and a lower 12.0% expecting deterioration.