It seems that the market is rather resilient in the light of the ongoing Sino-US trade dispute, but overcapacity in the electric car segment is increasing. 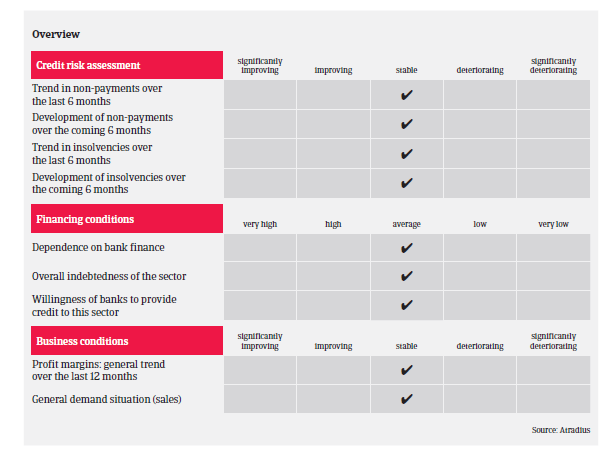 According to the China Association of Automobile Manufacturers (CAAM), domestic vehicle sales increased 3% year-on-year in 2017, to 28.88 million units, a sales increase far lower than the 10% rise seen in 2016. The slower growth was due to higher taxes on smaller cars and subsidy adjustments on electric vehicles. Passenger car sales increased 1.4% (among those SUV sales rose by 13.3%, to 10.25 million units), while sales of minibuses/multi-purpose vehicles plunged 20% and 17% respectively. Commercial vehicles recorded robust demand with sales increasing 14%, to 4.16 million units. In 2018 it is expected that vehicle sales will increase as much as 5% year on-year. 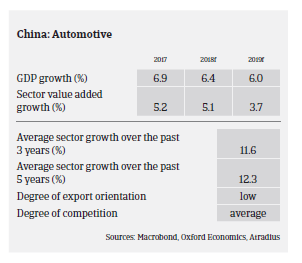 Electric cars remain a promising segment, as the government still provides substantial subsidies to manufacturers, while customers are offered incentive and favourable discounts for purchasing. State-owned institutions are encouraged to buy more new energy vehicles. The electric car market grew 53.3% in 2017, to about 780,000 units, while sales increased 111.5% in H1 of 2018. However, concerns over overcapacity are rising, as there are currently more than 200 electric-vehicle projects in China with investment of over CNY 1,026 billion and a potential capacity of more than 21 million units, while the government-set target aims at just 7 million units on the road by 2025. In order to guide the industry, the Chinese state is gradually reducing subsidies. Stricter rules are also set to raise the subsidy threshold, which will force automakers to increasingly convert themselves into hi-tech companies with core competencies. In this way, low-cost manufactures will leave the stage. 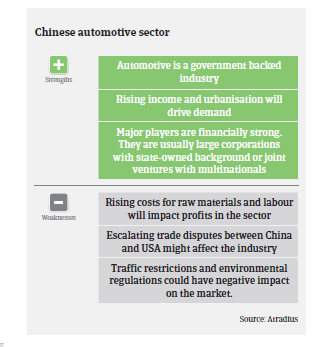 It seems that the Chinese car market is rather resilient in the light of the ongoing Sino-US trade dispute. Vehicle import and export volumes (1.25 million units and 1.06 million units respectively) are quite small compared to the industry output (29 million in 2017). The government has recently taken several measures to boost the automotive market. Since July 2018 import duties on vehicles have been slashed to 15% from 25%, while duties for car parts have been lowered to 6% from around 10%. The additional 25% tit-for-tat tariff is only imposed on products made in the USA. At the same time China announced it will ease limits on joint ventures within five years and open up the market to overseas carmakers. The rules will be loosened on electric cars this year, commercial vehicles by 2020 and passenger cars in 2022. All that should ensure a solid and steady performance of the domestic automotive market in the coming years. However, despite its resilience a major escalation of the current Sino-US trade dispute would surely impact the automotive business along with other sectors (e.g. potential deterioration of business and consumer sentiment). 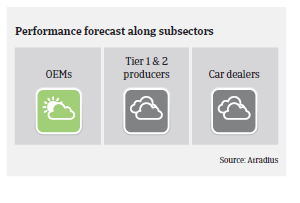 On average, it takes car manufacturers and suppliers about 90-120 days to collect debts. In the car dealers segment, average creditor days are about 40-60 days. Payment experience has been good over the past two years, and non-payments are not expected to increase in the coming months. The level of automotive insolvencies is low compared to other industries, and business failures are not expected to increase in 2018.

We see original equipment manufacturers as strong businesses, because of the segment’s high capital level, technical intensity and the growth potential of the Chinese automotive market. Our underwriting strategy remains open, but we are more cautious towards manufacturers of domestic brands than we are to joint ventures. We have a relaxed underwriting stance on core parts (Tier 1) suppliers, which are highly integrated into the supply chains of OEMs. Our underwriting stance for the basic component parts (Tier 2) segment is neutral. We are more careful with smaller companies in this segment because of their poor equity, which could lead to insolvencies. Unlike other manufacturers, businesses in this segment may have difficulty obtaining bank finance. Due to fierce competition and the, on average, small size of businesses, our underwriting stance for the car dealers segment is rather restrictive.

Business insolvencies in China are expected to increase further this year in 2018, as companies face tighter credit conditions and the economic rebalancing process is on-going.

Despite still high growth rates the sector is facing a challenging economic environment, with fiercer competition and oversupplies in some segments.