Squeezed between US protectionism and Chinese state-backed capitalism, the European Union is asserting itself as a torchbearer of the international trading system. As the US and China seized headlines during the G-20 conference with a temporary truce in bilateral retaliatory trade measures, the EU moved forward with two historic free trade agreements.

The goals of both trade agreements are the same:

Both agreements are expected to face uphill battles in their ratification processes. However, they set a strong example globally against the current trend of protectionist and unpredictable trade policies, and should offer expanded trade opportunities.

As with any trade agreement, increasing market access is a key component of both the EVFTA and EU-Mercosur free-trade deals. Five key elements characterise both agreements.

The signing of the EU-Mercosur Association Agreement is the first significant trade deal signed by Mercosur since its establishment in 1991. This will help the relatively closed markets in South America, especially Brazil and Argentina, boost economic growth. At the same time, the EU will benefit from a first mover advantage, offering better market access than given to other countries. 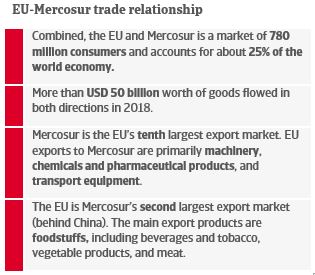 The EU-Mercosur free-trade agreement is no done deal. The principle agreement still needs to be approved by the European Council and European Parliament, as well as by the national legislative bodies in the member countries of both blocs. The agreement faces strong opposition from EU farmers, particularly those in France. Moreover, there is still a risk that Argentina may opt out if President Macri loses the October election to the left-wing populist ticket of former President Kirchner.

On top of the EU’s first mover advantage, this association agreement marks the largest deal the EU has ever struck in terms of tariff reduction. Import tariffs on 91% of EU goods exports to Mercosur will be eliminated over time. The European Commission estimates that this will save more than EUR 4 billion on an annual basis – fourfold the savings estimated by the EU free-trade agreement with Japan. The sectors that particularly benefit are those where customs duties are currently high. 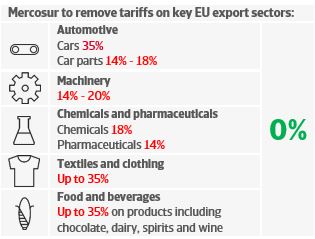 Finally, the pact will offer improved access to public tenders and maritime services. For the first time ever, Mercosur countries will open up their government procurement markets. They will also improve the transparency of tendering processes.

For the Mercosur countries, the agreement eliminates tariffs on 93% of exports to the EU and grants preferential treatment to the remaining 7%. Moreover, it signals that the South American bloc is finally ready to liberalise its markets after many years of protectionism. This is particularly relevant for Argentina and Brazil, which are among the most closed economies in the world. If ratified, the agreement will raise competitiveness, investments and productivity, thereby lifting potential economic growth in Mercosur’s member-states.

Agriculture is the trade sector that will benefit most. Brussels agreed to reduce barriers on 82% of agricultural imports, although quotas will be enforced on some sensitive farm products like beef (99,000 tonnes per year max). Meat, fruit, orange juice, sugar, and ethanol in particular will gain improved market access. Better access to overseas markets is of major importance for Mercosur, due to the pivotal role the agricultural sector plays in the economies of all four member-states.

On 30 June 2019, the EU and Vietnam finally signed the free trade agreement already negotiated in December 2016. Once ratified by the legislative bodies of the EU and Vietnam, the FTA will eliminate 99% of all tariffs on both sides, reduce regulatory barriers and overlapping red tape, and increase the use of international standards by Vietnam. While promising, this agreement is also not a done deal as some European lawmakers are concerned about Vietnam’s human rights record. 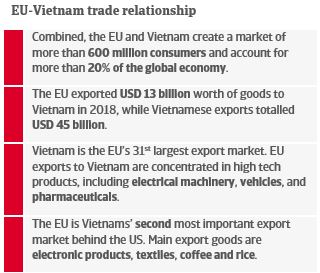 Vietnam is one of Asia’s fastest growing economies, regularly flagged by Atradius as one of the most promising export destinations. With 99% of tariffs being eliminated, several EU sectors will benefit from improved market access.

European companies will also gain improved access to public tenders, including infrastructure projects (similar to the agreement with Mercosur). EU service providers will also get significantly better access to postal, environmental, financial, and maritime services. Furthermore, 169 traditional European food and drink products will be protected against imitation in the Vietnamese market.

A major trade deal with the EU helps to boost Vietnam’s competitiveness in its second-largest export market. On top of the many free-trade agreements that Vietnam has already signed, it underlines Vietnam’s status as a stalwart of international trade and further integrates the country into the global economy.

With customs duties being nearly entirely eliminated, Vietnamese exports will be more competitive in the EU. Exporters active in the food & beverage, textiles/footwear, furniture, and electronics/ICT sectors will benefit most. Exporters of traditional Vietnamese products like local tea and coffee will also be protected in the EU. Additionally, modernising Vietnam’s legal framework and improving food safety and quality standards will boost welfare and increase investment.

Reductions in tariff and non-tariff barriers and mutual commitment to sustainability and human rights offer significant opportunities for the EU, Mercosur, and Vietnam. However, there are also challenges ahead, especially for companies facing increased import competition. In Europe, concerns are highest in the agricultural sector, as cheaper imports from abroad may crowd out domestic products. In Vietnam and Mercosur, the concerns primarily lie in the manufacturing sectors, which will also face increased competition from high-quality EU imports. This holds especially true for Mercosur, which has a long history of protectionism. Therefore, those markets will reduce their tariffs over a longer time horizon in order to ease the transition for businesses.

While there may be some potentially painful adjustments, the long-term prospects of these trade pacts offer major opportunities. In Vietnam and Mercosur, increased competition will force the governments to implement regulatory and tax reforms. At the same time businesses will have to increase quality and productivity. Both will boost investment and international competitiveness. In the EU, on top of improved access to two large markets, consumers should benefit from lower prices for some goods. Additionally, increased competition spurs innovation, which could increase competitiveness and productivity of EU producers.

World trade growth stagnated in Q1 amid the escalating trade war. While we expect some recovery in 2019, further escalation of the trade war could grind growth to a halt.

The global economy is losing steam in 2019 and 2020. Ongoing uncertainty regarding the trade war continues to cloud the outlook.

The Brazilian economy is going through a significantly challenging phase, which is severely affecting business and consumer sentiment.