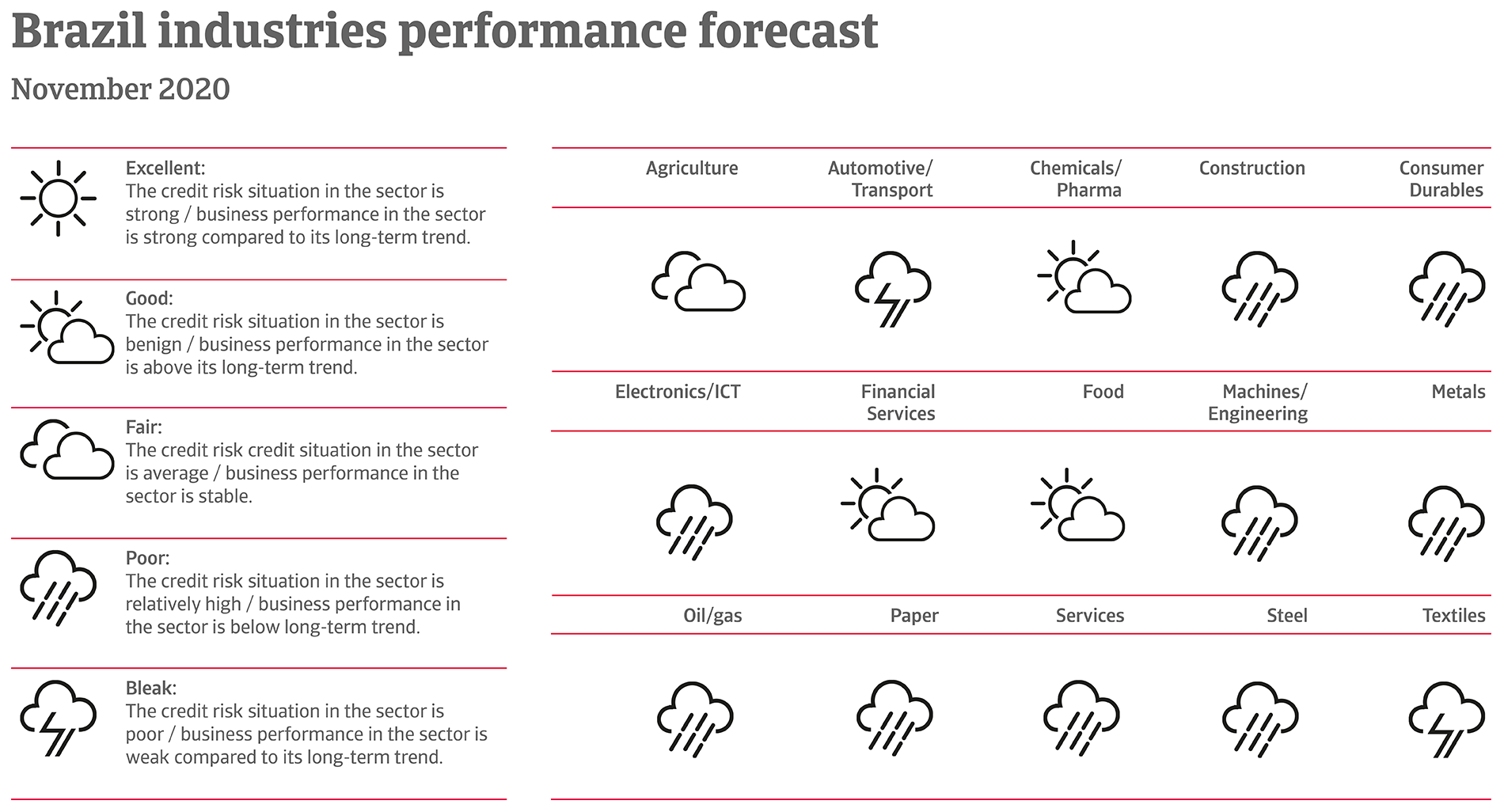 Political stability has increased over the recent months 2020

The administration under President Jair Bolsonaro pursues free-market and socially conservative reform policies, welcomed by the Brazilian business community and building on the market-oriented policies of the previous government. However, economic policymaking is hampered by a highly fragmented and polarised Congress, with 30 parties in the lower house and 21 in the Senate, and the ruling Partido Social Liberal having just 10% of the seats in the lower house. Bolsonaro governs without a formal coalition, but has recently allied with centre-right parties in Congress (which together hold about one-third of seats in the lower house) in order to reduce the risk of an impeachment that emerged earlier this year, and to improve governability.

Political and social polarisation increased due to Bolsonaro's confrontational leadership style, his socially conservative views, and his odd response to the coronavirus outbreak (while Bolsonaro disputed the seriousness of the disease, it was the regional governments that took containment measures). However, his popularity has increased since the summer of 2020, due to emergency assistance payments to poor households in response to the coronavirus crisis.

Political uncertainty could re-emerge ahead of the October 2022 presidential elections. The outcome of the November 2020 municipal elections will provide a first indication of Bolsonaro’s chances for re-election.

The impact of the coronavirus pandemic has put an end to the modest economic rebound since 2017. The recovery followed Brazil’s longest and deepest recession in 2014-2016, when GDP shrank by almost 9%. However, Brazil’s less stringent containment measures and stronger fiscal support have led to smaller output losses compared to most other countries in the region. In 2020 GDP is expected to contract by 4.6% (an upward revision from the 6.2% contraction expected in August). Business confidence has rebounded since June.

The massive spread of coronavirus in Brazil and subsequent lockdown measures have had a major impact on domestic demand, especially in H1 of 2020. The service sector (which accounts for about 63% of GDP) has been severely hit, contracting 11.2% in Q2 of 2020.

Both investment and private consumption are expected to contract 7% and 6% respectively in 2020. The number of jobless people increased to more than 13 million, and the unemployment rate is expected to rise to 13.5% in 2020. However, the impact of high unemployment on private consumption has been mitigated by government emergency payments (according to government figures, 67.2 million Brazilians have received such payments). Exports suffered from sharply decreasing demand in early 2020, but have rebounded since then (in particular commodity exports), and are forecast to grow 0.5% this year.

A rebound is expected in 2021, but downside risks remain

Currently, it is expected that the economy will rebound by about 4% in 2021, with private consumption and investments increasing 4.3% and 7% respectively. However, another longer-lasting surge of the pandemic and an ongoing global economic slump in the coming months pose a major downside risk for Brazil´s economic performance next year.

In order to support the economy, the Central Bank cut interest rates several times in 2020, to a historical low of 2%, and took measures to support credit lines for consumers and businesses alike. Low inflation (3.1% in September) and well-contained inflation expectations provided the Central Bank with additional room for its monetary easing.

The federal authorities have launched a package of fiscal measures adding up to 12% of GDP. Congress declared a “state of calamity” in March, which in 2020 allows the government to waive its obligation to comply to strict laws regulating public spending. Due to the additional fiscal measures and the economic contraction, the fiscal deficit is expected to increase to more than 18% of GDP in 2020, with public debt rising to 91% of GDP.

The sizeable fiscal deficit was already Brazil´s major economic weakness before the coronavirus outbreak, with persistently high annual budget deficits over the past couple of years. A constitutional amendment to eliminate automatic budget spending growth in line with rising inflation passed in 2016, and the adoption of a comprehensive pension reform in 2019 were necessary steps towards more fiscal sustainability. That said, additional structural reforms are needed to put government debt on a sustainable path, and to sustain investor confidence in the long-term. In this respect, progress has been made, as three tax reform bills have finally been submitted to Congress. However, some concerns remain that the temporary waiver to comply with public spending rules could be extended to 2021.

For the time being, the currency, refinancing and sovereign default risk are being mitigated by the fact that most of the debt is financed domestically (88%), in local currency (95%) at an average maturity of more than five years, and that the government is a net-external creditor.

Vulnerable to changing investor sentiment, but resistant to major shocks

However, a strong financial sector, sizeable official reserves, relatively low external refinancing needs, and the use of currency risk hedges enable the flexible exchange rate to act as a shock absorber. Under the condition that international risk aversion eases once the coronavirus pandemic abates, it is expected that the real will regain its losses.

Most externally indebted businesses have hedged their currency risk. Refinancing risk is also mitigated by a large share of intercompany debt, which accounts for two-thirds of the non-financial corporate foreign currency debt.

The economic contraction will deepen and last longer, while a debt restructuring settlement has not yet been reached