This year, Austria’s economic expansion is expected to decelerate to around 1.5%, due to weaker exports, decreasing investment and lower industrial production growth.

In line with a more modest GDP expansion, business failures are expected to increase slightly.

There was a marked increase in the proportion of sales made on credit to B2B customers by survey respondents in Austria. These amount to 65.3% of the total value of respondents’ B2B sales (up from 29.5% last year) and compare to a 60.4% average in Western Europe. This increase ranks second among the countries surveyed in Western Europe, after Switzerland (65.6%, up from 28.1% last year) and Germany (59.3% up from 24.7% one year ago). The increased use of B2B trade credit by Austrian survey respondents might be a reflection of strong export growth, which is expected to decelerate over the coming months because of the slowdown of Austria’s main export destinations. Domestic demand, in contrast, is forecast to remain firm over the coming months, and to keep on being the main driver of the economic growth of the country. 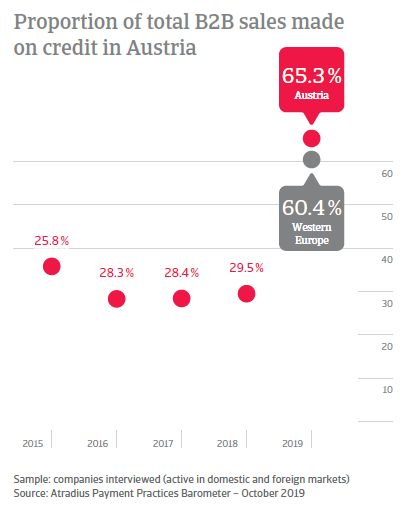 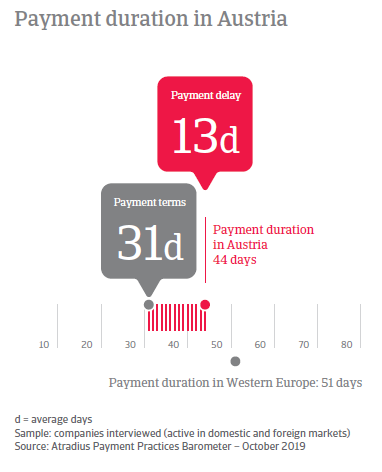 28.4% of the total value of B2B invoices issued by Austrian respondents over the past year remained outstanding past the due date. This compares to the 28.9% average for Western Europe. Despite a notable increase in timely payments from B2B customers (68.0% of invoices paid on time compared to 59.1% one year ago), respondents in Austria do not cash in overdue invoices earlier than last year (on average within 44 days from invoicing, which is similar to one year ago). This does not mirror observations for the region overall, where over the past year payment duration decreased on average to 52 days down from 55 days last year. However, far more respondents in Austria (54%) than in Western Europe (45%) reported no significant impact on business arising from late payments. This could be a reflection of the importance the Austrian respondents give to credit control. 21% of respondents (compared to 26% in Western Europe) needed to take specific measures to correct cash shortfalls. A standout survey finding in Austria, however, is the significant increase in the proportion of write-offs of uncollectable accounts, currently averaging 2.4% of the total value of B2B receivables (up from less than 1% last year). This compares to a 2.2% average for Western Europe.

Overview of payment practices in Austria

Austrian respondents from the construction sector extended the longest payment terms to their B2B customers (averaging 53 days from invoicing). Average payment terms across the other sectors surveyed in Austria range from 33 days in the agri-food sector, to 23 days in the consumer durables sector.

Over the past year trade credit risk in Austria has significantly worsened in the ICT/electronics sector, where 31% of the total value of invoices remained unpaid at the due date. The Austrian metals sector recorded the greatest improvement in customers’ payment speed over the past year. Across all other sectors surveyed in Austria, the proportion of overdue B2B receivables ranges from a high of 29% in both the consumer durables and machines sectors to a low of 18% in the metals sector.

With 2.6% of B2B invoices written off as uncollectable (up from 1% last year), Austrian SMEs display notably much lower efficiency than last year when it comes to collecting long-term overdue payments. The average for large enterprises is 2.5% (up from 1.7% last year) and nearly 2% for micro enterprises (up from less than 1% last year). 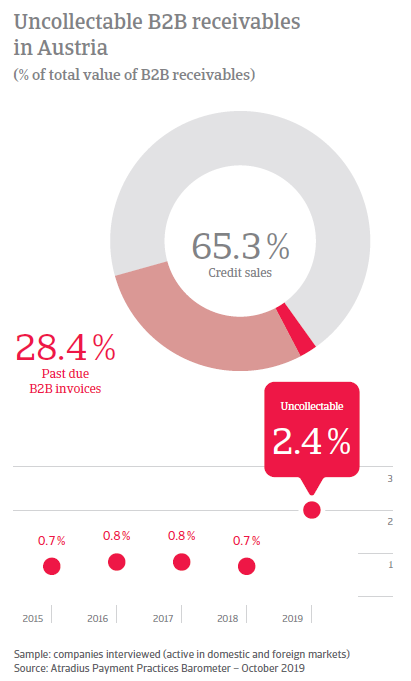 Franz Maier, Managing Director Austria, Hungary and Southeastern Europe of Atradius commented: “The Austrian economy appears to be fairly resilient, with GDP projected to grow 1.4% next year. Domestic demand is robust, mainly due to elevated consumer confidence, while exports decelerated consistent with the uncertainties related to the international trade environment.

However, many downside risks are on the horizon: the trade dispute between the US and China, the uncertain outcome of Brexit and the global trade slowdown that continues to weigh on Germany’s export prospects. The latter is, in particular, affecting Austria given the close economic ties between the two countries.

Survey findings show that, despite challenging economic times, Austrian businesses have a more liberal trade credit policy than last year, supported by more relaxed payment terms. This is possibly because of their sharp focus on credit management and proactive approach to safeguarding cash flow, ensuring business growth domestically and abroad. Despite this, businesses in Austria do have some areas of weakness as proven by the loss of efficiency in collection of long-term overdue invoices compared to last year.”

In 2019 Austrian economic growth is expected to decelerate after a robust performance in 2018, mainly due to weaker external demand and lower investment.

Developments in the US related to the election of Donald Trump and its expected effect on the US monetary policy path and international trade introduce significant uncertainty for EMEs in 2017.